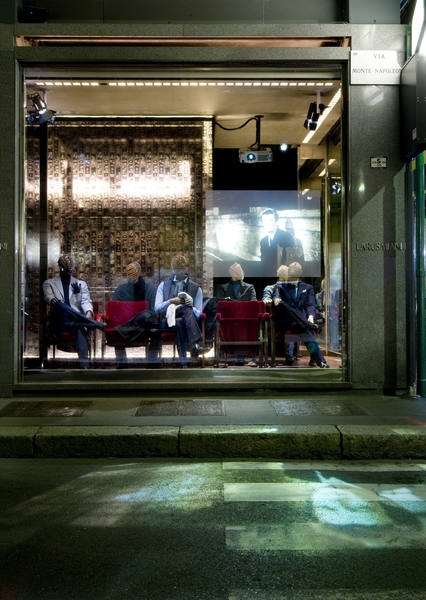 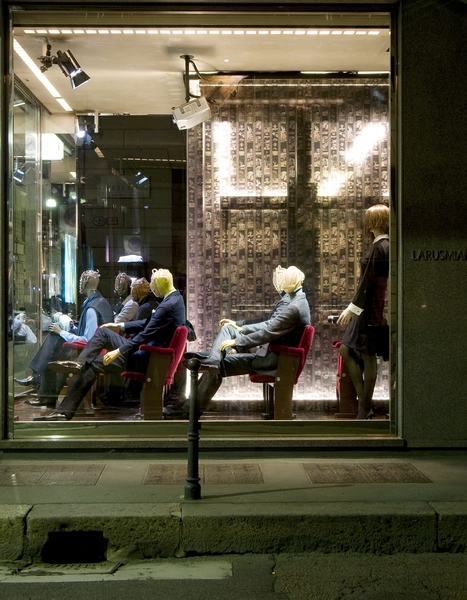 An idea of ​​cinema that reverses the traditional relationship between screen and viewer.

In a recreated projection room, new mannequins with abstract features, witness the spectacle of life that is represented every day on the street, to indicate that we are the cinema, known and unknown people, unsuspecting passers-by who stage their daily game of commitments, encounters, hugs and abandonments, haste and hesitation, thoughtfulness and indolence.

As in a Resnais or Lelouch film, chance, coincidence determines the variants of life, its feelings, its fleeting emotions.

But on the glass of the shop window, a clip takes shape that tells the proximity and the distance of a meeting perhaps future, perhaps already occurred, that the game of the imaginary mixes with mythical figures from the history of cinema: Louise Brooks, Jean Paul Belmondo, Marcello Mastroianni, Jack Nicholson … Because every fragment, even the most apparently insignificant, can turn into the frame of an auteur film. And for a moment, the common passer-by becomes, with its story, the character of a larger story, of a collective imagination in which each is ‘someone’ in the lives of others.

After all, the video camera that interacts with the projection of the clip has become public, stage production, and collective narration from a private medium.

The rhythm of a song by Paolo Conte, its sensual and nostalgic atmospheres, which smell of fog, of expectations and distances, the hoarse and male color of his voice, is the sound pedal of this short story, of this oblique game of cinema and life.